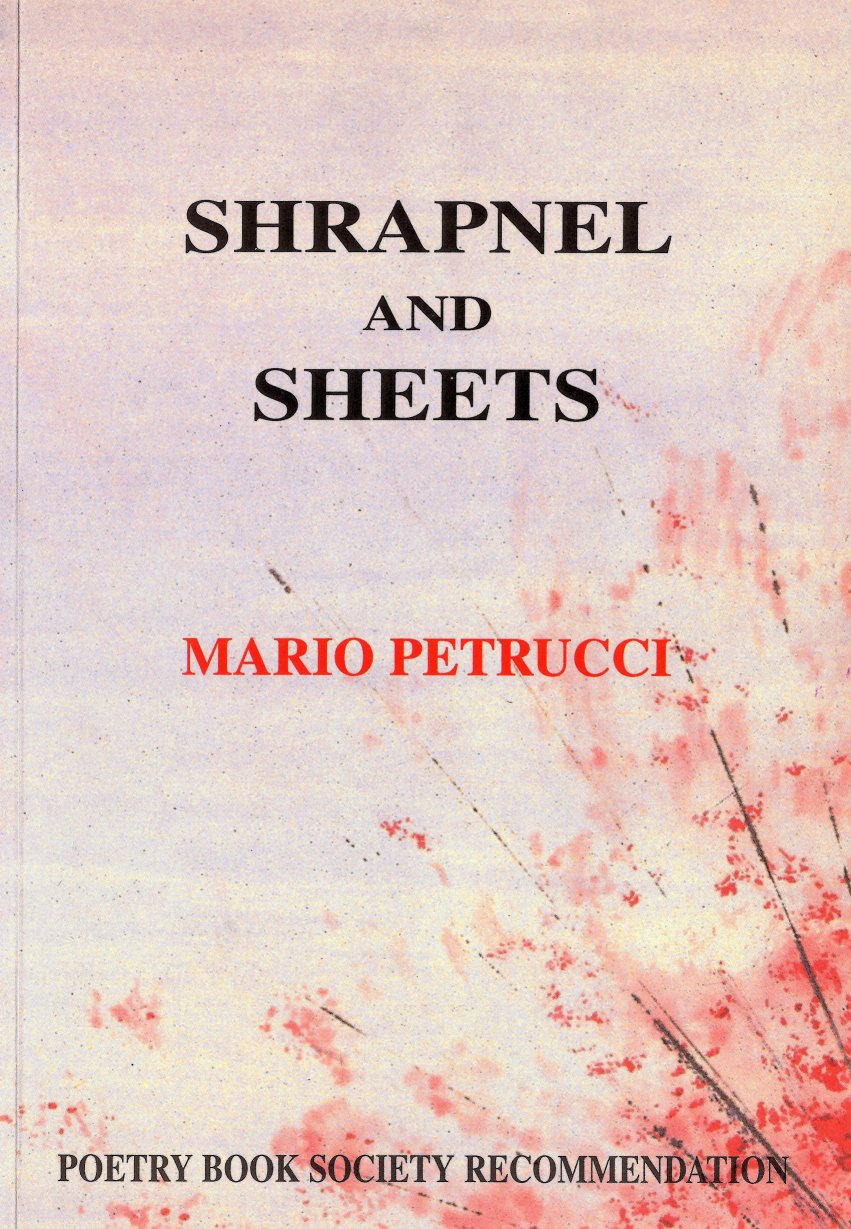 Twice excerpted for the Forward Anthology. Launched in the "New Voices" series
with Alice Oswald at the Royal Festival Hall. Featured on BBC Radio
and reviewed strongly across the literary press.


"Power and sensitivity; passion with formal control; obsession and immense range - these are the opposites made to collide and commune to astonishing effect in Shrapnel and Sheets, a much-awaited first collection by Mario Petrucci."

"Petrucci tracks a compassionate, but dissecting, eye across European and familial histories, exposing the extremes of human atrocity and tenderness, releasing poems that are at once revelatory and shocking, by turns hard-hitting and intimately lyrical."

Click here... for sample audio from Shrapnel and Sheets, courtesy of Archive of the Now

IF YOU WERE TO COME BACK

I'd stand at the door like one bereaved:
Aghast and breathless,
With silence stretched between us
For a second
Before it snapped -
And my heart burst its banks
In belief.

Then I'd draw you in by both hands
I'd kiss you on the mouth, on the face
Wear out your name
with soft saying
I'd kiss you more than you would want
Until you'd have to draw back, breathless
As one wounded
To try to speak, to tell me
Why it was you came.

Reviews of Shrapnel and Sheets

"He is one of several poets including Peter Redgrove, Kathleen Raine and recently Alice Oswald whose scientific training provides an added dimension for poetry. But perhaps the poems about Mario's Italian parents and grandparents are the most moving in this brilliantly varied book by a true European, whose sympathetic understanding extends to every human condition. Everyone should read it."

"Mario Petrucci's Shrapnel and Sheets reveals a confident moral and dramatic imagination, as in the strange parable of 'Foetal Dream', where an embryo is simply ordered like a pizza. Best of all are the sensitive poems about his family."

"Petrucci's poems make sense of personal and political histories. He is as likely to write in the voice of a war criminal or an 18th century physician as he is a schoolboy, a lover or son....Born of Italian parents, he explores his family's experience and builds bridges between countries, friends, wars and loved ones. His fine intelligent narratives share a common thread in a desire to make some harmony in a disjointed world. This book marks the debut of an honest and accomplished poet."

"Twin engines drive Mario Petrucci's poetry: one engine is a personal and cultural knowledge of the sweep of European history; the other is a scientific understanding few poets have. Between them, these engines take Mario's poetry to dazzling heights."

"Excellent - each individual poem and the collection as a whole. I love the richness of evocative detail, and the range and vividness of the language ... a really first-rate collection."

"Great first collection. Mario's poems show an enviable sense of control, a burnished feel from hours and hours spent at the writing desk, days and days hammering them out in workshops. It's true to say that the work of some poets can show a kind of workshop fatigue: Mario Petrucci's poems have been liberated by being worked on. The language and form sparkles and glitters.

Petrucci seems to hold the entire historical map of Europe in his head, and from this knowledge he's carved poems full of small and large insights into past and present. This unblinking eye also works well when cast onto the personal as well as the political: "I have felt my father's clench/ playful on my neck; or in anger/ across my face, his hand, rough/ from the work we needed to survive". Mario Petrucci has been a long time getting here; now that he's arrived, let's welcome him."