CONTEXT NOTES for the POEM   by Mario Petrucci.     "The Western Front 1914 to 1918 left a profound wound in our species. Trench Warfare created unimaginable contrasts between the best and the worst of humanity: intolerable collective brutality, and astounding individual sacrifice. ‘Strange Meeting’ is among the most moving and haunting poems of the First World War. A hundred years on, Owen’s words are still unsurpassed in their complex power and (in spite of his subject matter) their linguistic and formal richness. Through his eyes, we see again the ultimate failure of war, its utter futility. At a time when modern warfare can sometimes resemble a computer game, Owen puts us face to face with the ‘enemy’. He leads us into an underworld where we are all accountable (symbolically, if not actually) for the actions of our representatives in conflict, where fallen combatants have at last a chance to exchange heartfelt words, to lock eyes in the midst of nightmare and speak their dreams, their truth."

STUDY NOTES for the POEM   by Mario Petrucci.     "This video provides a superb resource for teachers in the classroom who wish to bring the poetry of the First World War more fully to life. It introduces powerful and provocative material, for group discussion and individual contemplation alike. Whether or not this particular poem is included in your curriculum, syllabus or exam, its relevance to the study of poetry more generally is easily established. Owen's use of form, for instance, is both lyrical and unsettling, and the ideas and metaphors he stitches through the fabric of the poem are of a rare order. It is, finally, deeply informative (as part of your literary studies or your analysis of poetry) to compare this poem to some of the more conventional verses that were commonly written during The Great War. Indeed, Owen's remarkable piece makes a superb choice for any 'Compare and Contrast' exercise of this kind. One subtle technical aspect of this poem is the way Owen rhymes words or syllables 'front and back', creating a disturbing yet profound ongoing sonic effect: groined/groaned, hall/Hell, grained/ground, moan/mourn, years/yours, wild/world, spoiled/spilled, mystery/mastery, world/walled, war/were, friend/frowned, and so on. [How many more of these can you find?] This is a remarkable example of what I (more generally) call 'sonic stitching' in a poem. For this particular sonic effect, though, as used here, the usual technical term is 'pararhyme', and Wilfred Owen was one of its first major exponents. In pararhyme, the consonants either side of the central vowel 'agree', but the central vowel itself differs. This is a brilliant move on Owen's part: to utilise a sonic device that comes close to rhyme, but that feels vaguely 'off' or 'wrong'. In his poem, the completeness of a 'hard' [or ‘full’] rhyme is withheld, denied. Ask yourself: how does this technical effect underscore the subject matter – and the overall mood – of the poem? Moreover, the fact that Owen used this near-rhyming device so insistently in his poem and yet still somehow manages to maintain the sense of an ordinary speaking voice (with all its authentic emotion kept intact) is nothing short of genius."

"You had them falling over themselves to praise your session. They were enthusiastic about everything, your talk, your notes and the involvement of the students. You provided a great deal of food for thought and ideas for follow-up work. Thank you for another outstanding session." (Institute of Education, organiser comments, 2010)

"Thank you for taking the trouble to make your talk interesting and appropriate for first year A-level students. What comes through from the teacher feedback is that your talk worked both for them and their students and that you managed to make it both accessible and stimulating." (Institute of Education, organiser comments, 2008)

"Your magic touch... a perfectly-pitched, interactive session which made the students actively think. They enjoyed your in-depth examination of poetry before and after the war and seeing/hearing your varied resources, to help them explore context... plenty for them to take away to the classroom and put into practice for their examinations." (AQA event at Imperial College London, organiser comments, 2017)

'Strange Meetings: an evening of War Poetry with Mario Petrucci'. Special Edition series: 6 August 2014. Southbank/ Saison Poetry Library.
The World Wars represent crucial turning points for our civilisation. The unprecedented psychological and material upheaval meant that poetry could never again rest on its Georgian laurels – or did it? In a presentation that bristles with provocative insight, Petrucci guides us on an unexpected journey through the poetry of WWI and WWII, introducing us anew to those war poets we have come to admire but also, just as poignantly, to those of immense influence who are now long forgotten. Utilising original recordings and live recitation, Petrucci conveys the poets’ messages directly, generating a powerful and intimate experience of war poetry. [A full recording of Mario's talk is held at both the Saison Poetry Library and the British Library.]      [Repeated: 4 Nov. 2014, by popular demand.]

'Voices from the War'. Click here for brief audio of the interview given by Mario prior to the 7 May 2015 'Poet in the City' IWW event held at The Old Town Hall in Richmond (London). (The event in its entirety was itself recorded for audio archive by the British Library.)   [If the Poet in the City link given above is down, &/or to listen to the author's re-edited version of this audio, click here - by kind permission & for archive purposes only.]

"Petrucci's poems deal with the emotional condition of war, the suffering...   The effect of these tiny poems placed next to enormous pieces of metal
is powerful.   Placed in intriguing places, like the treasure at the end of a hunt, these poems achieve something more complex than the pleasure
derived from finding what one is already searching for.   They produce an atmosphere of disquiet."   Jane Rendell, Art & Architecture (2006).

* LiterARTure: principles of visual art embedded in the text and its creation - or - literature/text contextualising and framing an artefact. 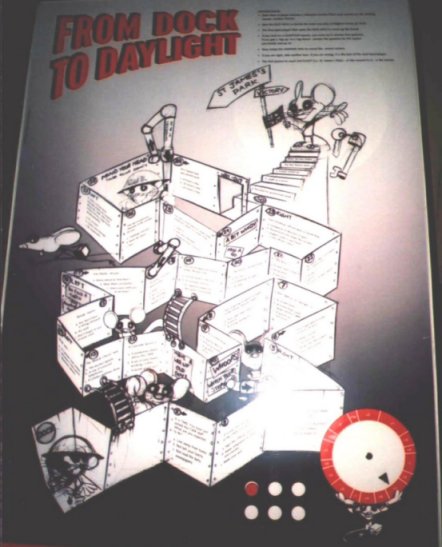 'Dock to Daylight' game for children at the Cabinet War Rooms.

CLICK HERE to play the 'Dock to Daylight' game! 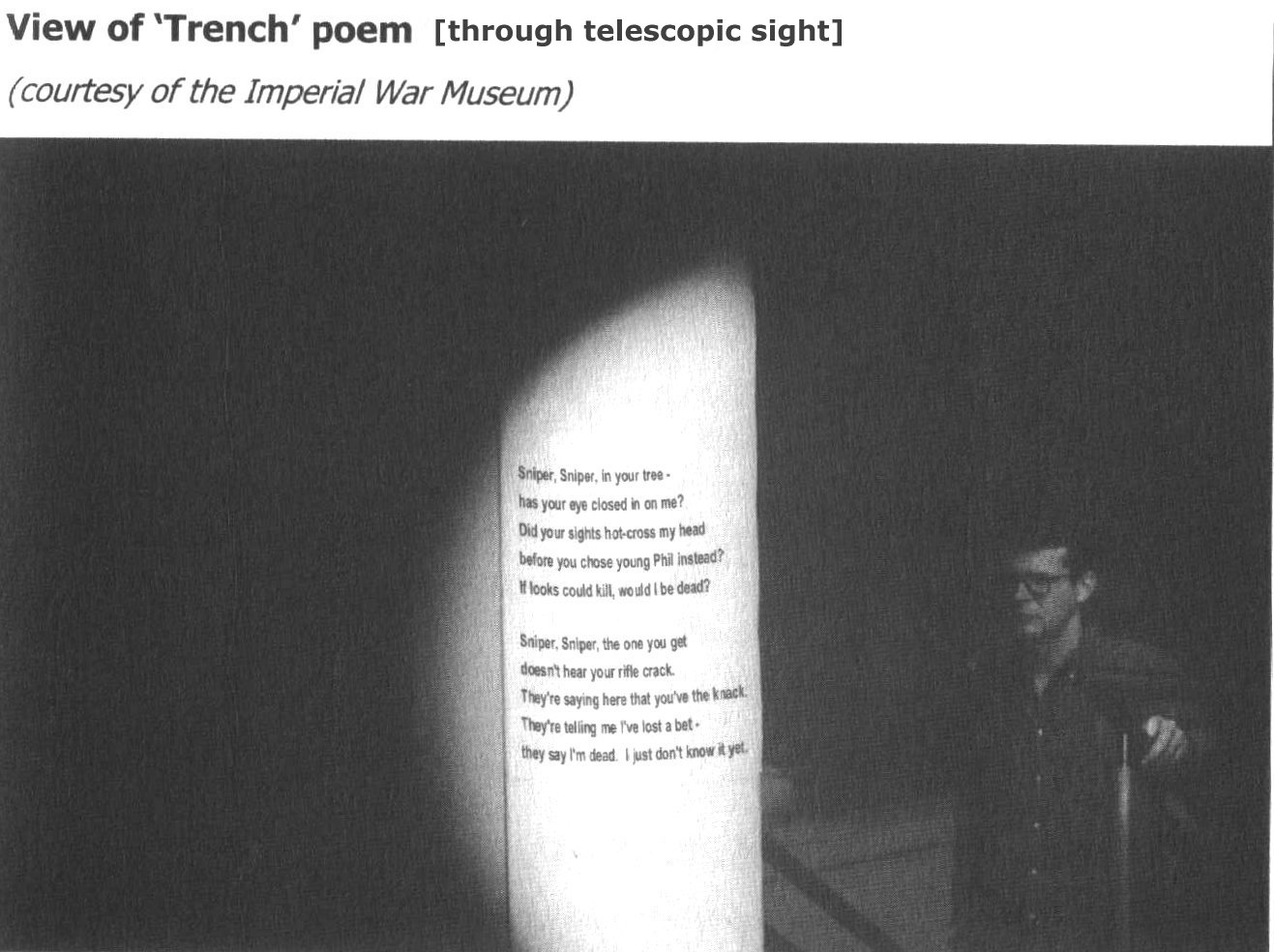 Click here to read an article on Mario's residency in Poetry News
Responsibility for the localised spelling carnage in this piece (as published in 'Poetry News') lies with its (unknown) editor.


'After Auschwitz it is barbaric to write poetry' - Theodor Adorno.

'Those who cannot remember the past are condemned to fulfil it' - George Santayana.

I am reliably told I have raised eyebrows at the Museum by NOT merely musing in corridors. I attempt to make inputs to the exhibit space which are linguistically exciting, and to initiate new literacy projects which will engage and delight all visitors regardless of age: it is important for the principle of a residency to survive its first resident!

The Poetry Hunt at the Imperial War Museum ('Search and Create') involves poems hidden provocatively among the artefacts. In designing the poems, I wanted texts that were varied, accessible, challenging yet fun, and able to shoulder a wide range of language-based activities. Each piece had to relate imaginatively to its exhibit, able to "draw out" (educare) a creative and empathetic response, particularly from children; and yet the poems had to maintain an authentic and novel presence in their own right. Poems were sited so that their discovery generated unusual postures (crouching, peering, etc), bringing a fresh and suggestive physicality to their reading. In every sense, then, I was at full stretch: how could a 'concrete' poem, consisting of a deranged 'sideways' couplet, embellish or subvert a fully-fledged Exocet missile? And why should it? As part of a generation which experiences the horror and fascination of war mostly through the cellophane of media representation, I was acutely aware of Seamus Heaney's advice not to "rampage permissively" in other people's tragedies.

But multiple constraints are also multiplied opportunities, and while I wandered (palely loitering?) around the Museum balconies long after the public had been ushered out, poems did begin to suggest themselves, along with some unusual (if not unique) contexts. 'Trench', for example, involves a telescopic sight, down which - invariably - children cannot resist looking. When they do, they read a poem on a distant pillar, fixed at about head height on a flight of stairs continually used by visitors. Here, the substance of the poem has been extended into the optical system of the telescopic sight, a move designed to both frame and modify the way the text is read. This telescopic situation becomes heightened through certain formal aspects of the poem, with the language conditioned by the new space. For instance, the hard end-rhymes emphasise a sniper-like scanning of the eye, while the familiar child-like naïvety of the opening lines (reminiscent of 'Twinkle Twinkle Little Star') suggests vulnerability together with an ironic sense of the morbidly sinister 'game' the soldiers are playing. These textual factors combine with the physical action of 'sighting the poem' to generate a matrix for reception far more resonant than that of the page alone. This kind of matrix is especially crucial in an environment where children are (perhaps understandably) not encouraged to touch.

Key moments? A five-year-old's cry: "Look Ma, a poem!" The moonlit all-nighter spent alone in the Museum's galleries. British Airways making a video of the poems for its long-haul flights; the Public Art Journal featuring the Hunt as a novel concept in (what I was able to coin as) 'synaesthetic' captioning [see 'Synaesthetic Space' in Public Art Journal, October 1999]. Handling Isaac Rosenberg's grubby trench-scribblings, which left me appalled and speechless. Perhaps most powerful of all: an ordinary soldier's letter to his daughter, desperate to cram an entire fatherhood into its few tightly-scrawled pages.

Not all of my discoveries were text-based, however. I also uncovered in the archives, unexpectedly, a cartoon in the autograph book of a POW named Anckorn (1943). It is a Ronald Searle self-portrait! A rather fuzzy Ronald is being cajoled in a typically Sargeant-Majorish way to damned-well get a haircut. It was a gift to Anckorn - a light moment in a catalogue of frustration and deprivation. This cartoon, with its direct charm and truth, became a touchstone for my introduction at the Museum of an evening celebrating the publication of a new book by Previous Parrot Press. A selection of Searle's drawings, accompanied by Simon Rae's sonnets-in-response, were collected into 'The Face Of War'. There is something incorrigible about Searle - he manages to quarry wit and style from humanity even in the context of its most base statistics. Meanwhile, Rae succeeds in holding a revealingly dark light to those drawings. I feel I have shared something of the edificial quality of Rae's challenge - in my case, by trying (for instance) to get that deranged couplet to square up to its missile!

Scholarship aside, I have experienced a peculiar combination of adrenalin and humility in being able to bring out some of the archive material into the Museum space in suggestive and educational contexts. Through my writing and teaching I have also variously supported the new Holocaust wing, special exhibitions such as 'Bomb to the Beatles', and a number of Edexcel courses for teachers. Not least, in encouraging children to "Search and Create" - that is, to look for poems hidden among the exhibits in radical ways - I believe the Museum experience has been augmented and enriched.

But where does that leave us, with respect to Adorno? Sidney Keyes, the brilliant young poet tragically killed in 1943, talks about our century's "Death Wish". 27 million Russians. 6 million Jews. And all the others. I sincerely hope my work at the Museum is a tangible challenge to Adorno in reasserting the enduring need, in humility and humanity, for war poetry. Santayana's is a linguistic as well as philosophical truth. Which means that every age needs its poets to see and to re-member; or at least to act as mitigators against what Robert Minhinnick calls "our amnesiac selves". 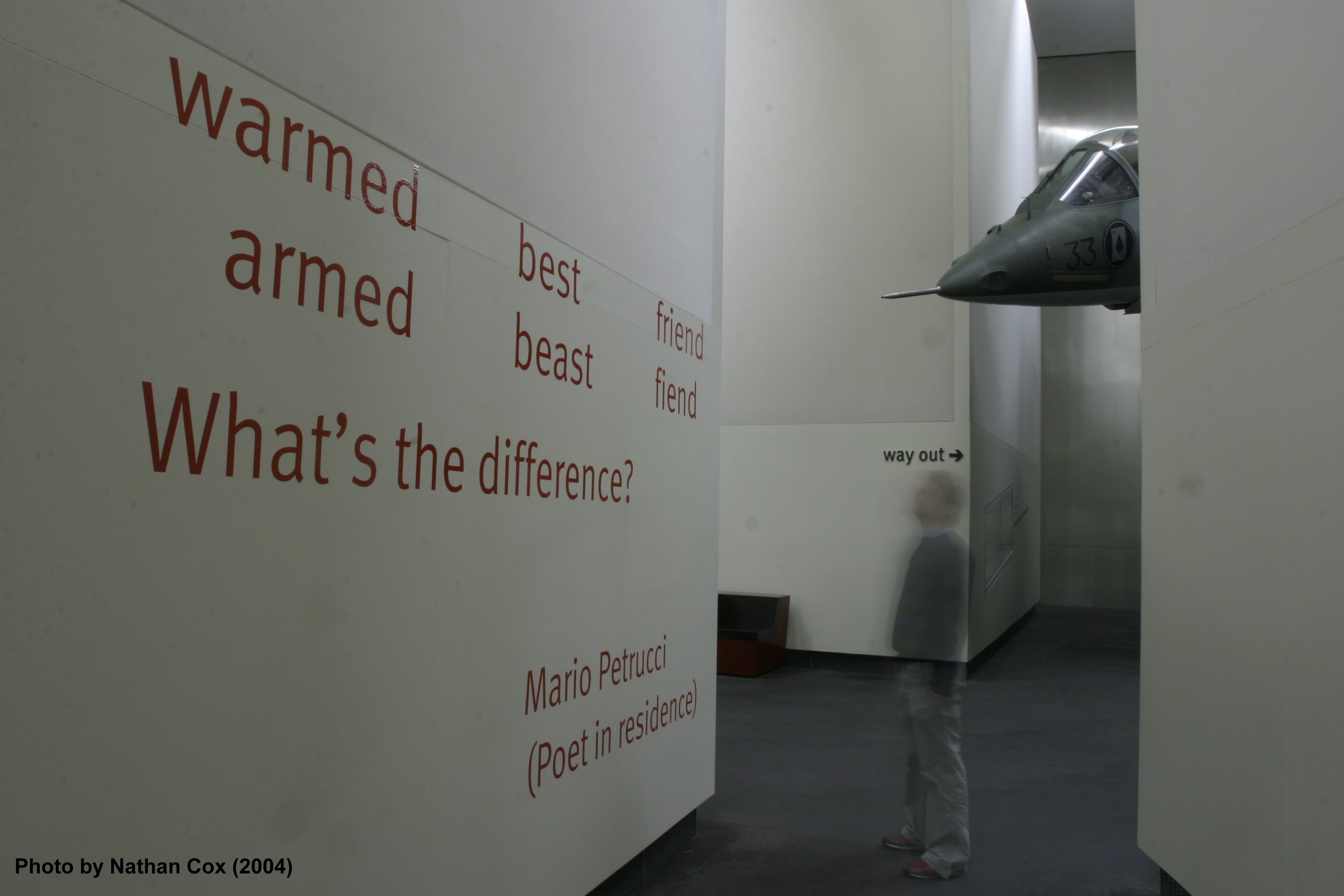 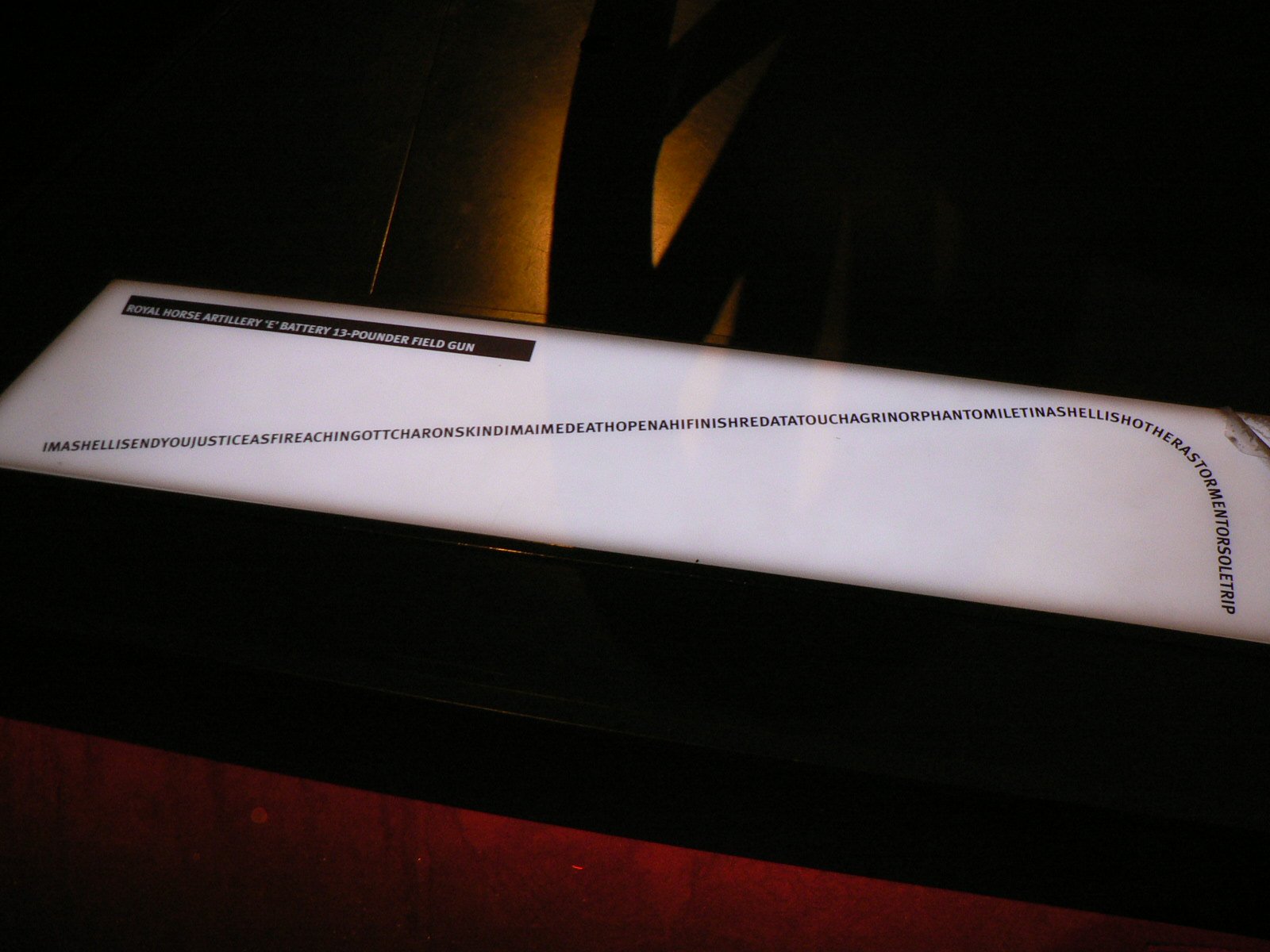